Sen. Tom Cotton (R-AR) on Sunday appeared undisturbed by President Trump’s refusal to commit to a peaceful transfer of power if he loses the November presidential election to Democratic presidential nominee Joe Biden, because he’s confident that Trump will win re-election.

Whenever Tom Cotton speaks, I’m amazed anew that someone can function with only an Adam’s apple for a brain.

Pure Bolshevism on display here. “The end justifies the means.”

These morons really think they can subvert the will of the people indefinitely. If you start down the road of cheating to win, you’d better be prepared to continue cheating, at least until you suffer the inevitable consequences of your actions.

Tommy Cotton Gin needs to say this to appease his so-called constituents, but it’s the same bluster as the Orange Menace with a southern drawl and just as little tact.

When I saw that picture this popped into my head.

Leading dickhead in a party full of dickheads.

I don’t know why I even watched that interview this morning, because looking at him and listening to him makes me sick to my stomach.

Since he’s so confident of a Trump victory then he won’t mind holing off the vote on the Supreme Court nominee, right?

Another Sunday with Repub/Rump sycophants keeping Rump’s name in the news. Who cares what Cotton has to say?

Ha ha. That would require surrendering to reality.

Whenever Tom Cotton speaks, I’m amazed anew that someone can function with only an Adam’s apple for a brain.

So if we can get someone to talk to Cotton and get him choked up, he’ll self asphyxiate?

Baghdad Bob of The senate say what?
We’ve hit the point where Mass Death and serial lying doesn’t even raise an eyebrow
Its a Meh ,meh. meh world
Not even worth reacting to other than VOTE

Me, too. You saved me the trouble of looking it up, thanks.

It’s really disturbing that these assholes are not even pretending that there will be an outcome that does not end up in court. I’d like to start hearing some pushback from state Secretaries of State - both D and R) - who have had enough of having their integrity impugned by Trumpistas assuming they are corrupt and incompetent and incapable of running fair elections.

I’m not sure why anyone cares what Tom Cotton has to say. His mental processes are at about the coloring book level. He actually looks like a crayon. He has two reactions: Adoring (anything Trump or other right-wingers do and say) and appalled (anything that anyone who is a Democrat or politically to the left of him does or says). America is either “great” (if Trumpian) or “in dire chaos” (if non-Trumpian). He’s not even that good at coloring.

Can somebody please remind Trump and his hemorrhoid licking followers that he does not get to decide the legitimacy of the election.

The process… from Amy Dacey- Executive Director of the Sine Institute of Policy and Politics, American University (https://theconversation.com/who-formally-declares-the-winner-of-the-us-presidential-election-145212)

American democracy has many elected officials – state, local and national – and many processes for getting into office.

I have been working on election campaigns since I was eight years old, when my dad ran for school board and I went door to door asking people to vote for him. I’ve also worked on local, congressional, senate and presidential races and now direct an academic research center on politics.

What’s striking is that every race is different, from deadlines and filing process to certification. Here, I’ll focus here on the presidential race.

The unusual and complicated presidential election certification process in the U.S. entwines all 50 states and the District of Columbia, the Senate, House of Representatives, the National Archives and the Office of the Federal Register. It also involves the Electoral College – a uniquely American institution that convenes in 51 separate locations once every four years to pick the president. 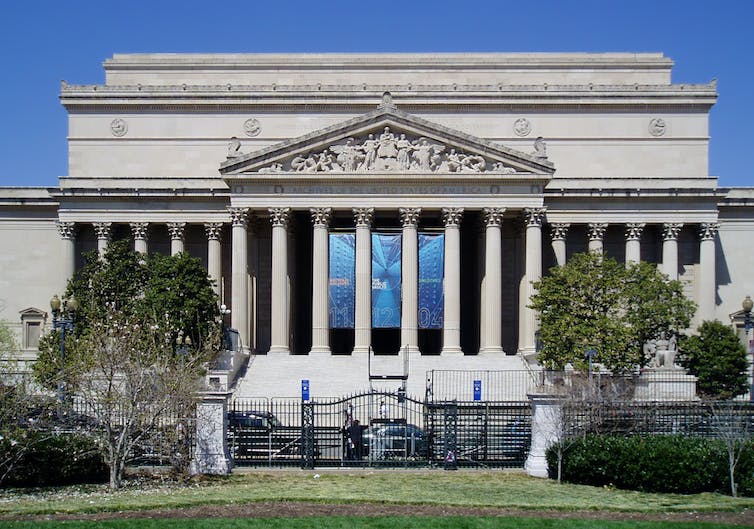 This four-month process was custom designed as a compromise by the Founding Fathers, who did not believe the American people should directly choose the president and vice president but did not want to give Congress the power of selection, either.

The Constitution declares that American presidential elections occur on the first Tuesday in November, every four years. But the federal election process actually begins in October, when the Archivist of the United States – a presidential appointee responsible for maintaining the government’s most important official documents – sends a letter to the governor of each state.

The document outlines their responsibilities regarding the Electoral College, which is not a place but a process by which electors – people who are chosen by their party – vote for their party’s presidential candidate.

The machinery of the Electoral College is complicated, but in short Americans vote for electors and the electors vote for the president. Then, the winner is declared – right?

Read more: How is the American President elected?

Once a final tally of voters’ in-person, mail-in and provisional ballots has been concluded, all 50 governors prepare their state’s Certificate of Ascertainment, a document listing their electors for the competing candidates.

Each state completes that process at its own rate. This year, because of the pandemic, finalizing the electoral vote count will likely take a lot longer. Once completed, copies of the Certificate of Ascertainment are then submitted to the U.S. Archivist.

After the governor submits names to the Archivist, each state’s Electoral College electors meet in the state capital – D.C.‘s meet in D.C. – to formally cast their votes for president and vice president on the first Monday after the second Wednesday in December. This year, that’s Dec. 14, 2020.

In ways that vary state by state, each state’s electors then prepares six Certificates of Vote, which are sent by registered mail to the President of the U.S. Senate and the Archivist of the United States. The remaining four certificates are sent to state officials.

That fulfills the Electoral College’s duties until the next presidential election. 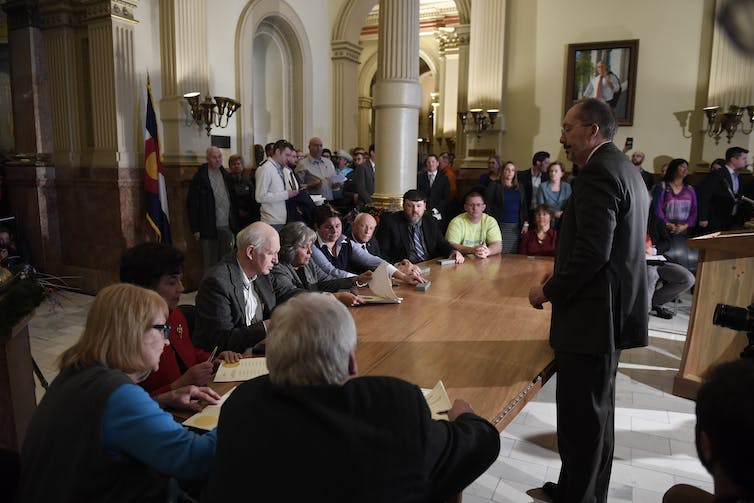 On Jan. 6, Congress convenes to count the electoral votes and certify the winner of the election.

Because the sitting vice president also serves as president of the Senate, Mike Pence will preside over this count in 2021, just as Vice President Joe Biden did in January 2017 when Donald Trump officially became president-elect. Each state, called upon in alphabetical order, files its votes.

This process is in some respects ceremonial, because by January the media has declared a winner and usually a concession speech has been given. But, officially, it is the moment of truth.

At the end of the Senate’s electoral vote count, the vice president announces the results and asks if there are any objections. In 2001 Democratic House representatives tried for 20 minutes to block Florida’s highly contested electoral votes for George W. Bush.

On Jan. 6, 2001, as George W. Bush was certified as President of the United States, members of the Congressional Black Caucus tried in vain to object to the election result.

That effort failed, because objections must be signed by both a member of the House and the Senate before being voted on by both chambers of Congress. It fell to Vice President Al Gore, as president of the Senate, to declare Bush – his Republican opponent – the winner of the 2000 election.

After the Senate certifies the election results, all the Certificates of Ascertainment and Certificates of Vote then become available for public review at the Office of the Federal Registrar for one year, then transferred to the National Archives for the permanent record. Those who question the outcome of a U.S. election, in other words, can actually double-check the tabulations themselves.

[ Deep knowledge, daily. Sign up for The Conversation’s newsletter.]

In the extraordinary event that no candidate wins in the Electoral College, the House of Representatives meets to elect the next president. This is how John Quincy Adams became president in 1824.

Established almost 250 years ago, this complex process is a foundation of American democracy. Many have questioned whether this antiquated system truly represents the will of the people in modern America.

But for 2020, it remains the process that will decide the presidential race.

After Trump narrowly lost NH in 2016 he immediately said it was stolen, thereby calling thousands of poll workers and state officials a bunch of liars and cheats… I wonder if he could do that to their faces? He’s such a psychopath that he’s probably capable of anything.

Let me be as dignified as I can be: fuck off asshole 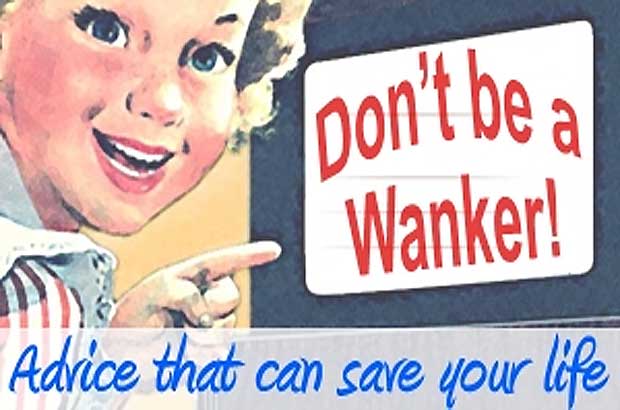