Does that mean those soldiers - current and former - who don’t want to serve under Trump, aren’t putting “America first”?

I doubt he’ll do much changing to American foreign policy. In fact he can’t.

I’m an international American…lived about 35 years outside of the USA. Trump is seen as a contemptuous vulgarian idiot by just about everyone I know in Europe and Latin America. That’s why Putin likes him.

It goes down like this. Americans use the term 3rd world a bunch but I haven’t met many that know what it means. The first world is the USA and countries in its orbit. The second Russia ( was the USSR ) and China and their followers. The third…the ones on their own. You put Trump in the White House and you’ll see a movement from Central and South America in the direction of the second world. Central and South Asia the same.

America will not become first…it will become isolated and alone. If you repudiate trade agreements, bad as they are, your going to get revenge fucked by the world. Respect for American copyright is already bad but it will get a bunch worse. China and Brazil will knock off everything we have dibbs on. There is way to much to talk about here.

It aint happening. Trump can’t do it.

America first? Thats so predictable, maybe every once in a while he will put a random country first to be unpredictable.

“America first will be the major and overriding theme of my administration,” he said.
…
You aren’t elected yet Donnie.
…

Trump showed reverence for Ronald Reagan’s foreign policy approach in
the Cold War and said that the United States’ foreign policy has since
veered off course. He said that “logic was replaced with foolishness and
arrogance,” which helped throw the Middle East “into chaos.”
…
Logic in the Middle East…Ooookay. Good one. Let’s make it simple Donnie says.
And just when and where has Obama ever been arrogant? Bush was but Obama, not so much.

So essentially Trump has said nothing but platitudes.
Donne, can ya “do a deal” for peace? Based on money since the almighty buck is your standard for excellence. After all that’s how you described your approach to China. “I know the Chinese, I did a deal with 'em and made millions.”

I could swear, his entire teleprompter speech was a version of George Orwell’s 1984…only not quite so deep or thoughtful, but mere pablum with a teaspoon of Ronald Reagan sugar on top. More of the same from the bullshit artist himself.

“War is peace. Freedom is slavery. Ignorance is strength.”

“Strength through unity, unity through faith.”

tRump’s jingoism seems to pass as his over-arching foreign policy. It only shows that he’s capable of the most empty rhetoric possible. Emotive and declarative statements of desire aren’t foreign policy prescriptions, no matter how you slice it. He hasn’t even bothered to think through any of these weighty topics to any extent. That would be like actual work he’s not about to actually do. So, no surprise here.

All he knows is TRUMP FIRST. The rest is always collateral damage.

He said that “logic was replaced with foolishness and arrogance,” which helped throw the Middle East “into chaos.”

Ah NO. It was Neoconservative American Unilateral Foreign Policy practiced by the last Republican Presidency and every one before hat, that practiced the same strategy. His comments today must be sending chills through the minds of our allies…

Because …‘In your heart, you know he’s Reich.’ 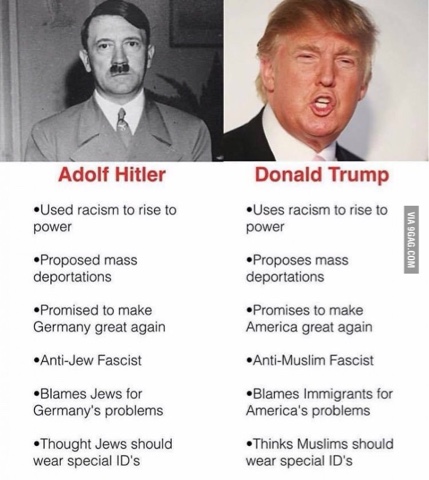 They say America First, but they mean America next…

As opposed to Obummer, who put Kenya first. And Hillary, who will put Lesbos first.

It was kind of strange hearing an American presidential candidate declaring he wants to be Leader of the Communist World.

Trump declared that our democratic European allies were taking advantage of us but heaped loads of praise on both communist Russia and China. What’s wrong with this Republican? He doesn’t seem to have the kind of respect for Senato Joe McCarthy that he should.

It’s not as if we need further proof of this man’s complete lack of qualifications to sit in the Oval Office…he opens his fat trap and tells us just how ignorant he is of world affairs, among other things.

How can one take a presidential candidate seriously when he has orange skin, and raccoon eyes from the goggles at the tanning salon? The comb over is bad enough, but really, those white eyes surrounded by synthetic tan look really foolish. 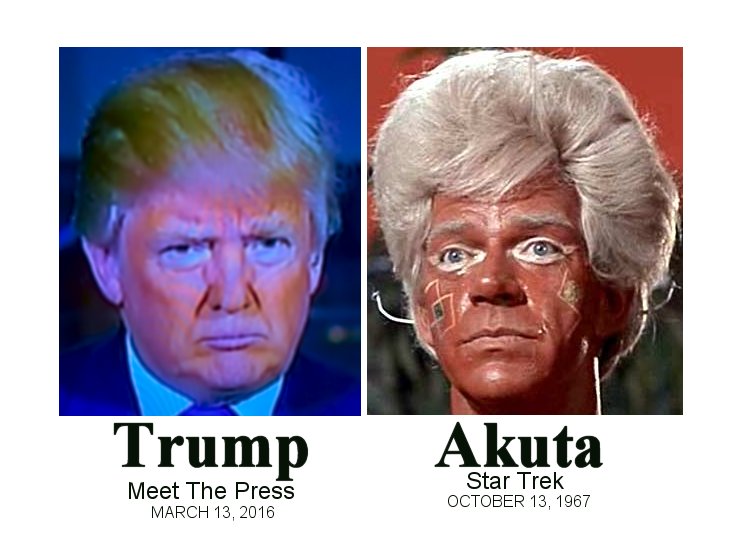