The United States has the authority and responsibility to ensure that Texas cannot evade its obligations under the Constitution and deprive individuals of their constitutional rights.

Sad that the Democrats have to do the job for the Supreme Court.

Of course, the Supremes may well go full Christianist and uphold the Texas law, as well as overruling Roe in the Mississippi case. That would be a true Pyrrhic victory, as it would almost guarantee the Democrats holding the House and the Senate.

That would be a true Pyrrhic victory, as it would almost guarantee the Democrats holding the House and the Senate.

And the groundswell for Supreme Court reformation to become a hurricane. Dare we say - “Bring it on”?

My letter in Monday’s Eugene Register-Guard (and note, IANAL but this letter was inspired by a Yale law professor, who wrote at http://balkin.blogspot.com/2021/09/private-enforcement-mechanisms-and-you.html)

Are you tired of hearing that Trump won the 2020 election? Tired of hearing media promoting lies about COVID-19 vaccines? Texas and the U.S. Supreme Court show Oregon the way out of this dilemma.

Oregon legislators can pass, and Gov. Brown can sign into law, a bill that allows private citizens to sue anyone disseminating these lies and collect damages and attorney’s fees for each successful suit, allowing the one who sues to avoid paying any defendant’s attorney’s fees.

If a radio or TV station, radio host or TV reporter, newspaper or social media influencer, repeats or even reports such a lie, they could be sued as an abettor!

Act, Oregon legislators! Put an end to these harmful lies! Awaken the law, that confused giant! Show that Oregonians are just as smart as Texans! Many Oregonians would be eager to take the liars and their abettors to court, so give them the tools!

OT. A close to final post mortem of the political press coverage of the CA recall.

Congrats to the TV producers and journalists who devoted air time to Caitlyn Jenner. https://t.co/Bk3nqQIocK She got one percent of the vote last night. Good call.

As a California resident, I approve of this post!

Well it’s traditional to start at the beginning of the alphabet, right? How about “Amy”?

Persephone, Hades’ consort and queen of the underword.

Persephone, Hades’ consort and queen of the underword.

But then we’d need to unpack the courts every spring only to repack them again every fall…now that you mention it, might not be a bad plan

A close to final post mortem of the political press coverage of the CA recall.

There will be some more analysis in a week when the final numbers are in. Not for Jenner, but to see how much the question one recall gap has closed.

Of course, the Supremes may well go full Christianist and uphold the Texas law, 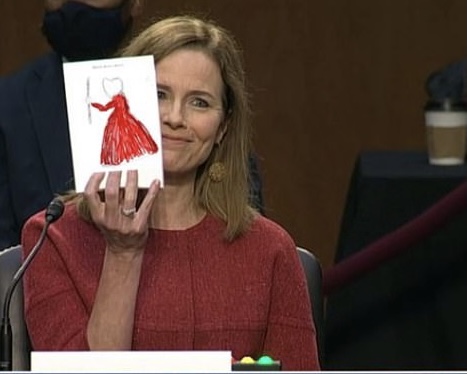 Why is she showing off this year’s Christmas cards?

Yeah but in some stories Persephone was not a willing Queen of the the Underworld. So why not Hecate or Lamia?

IANAL but this letter was inspired by a Yale law professor

IAAL, and I can tell you it’s well established that the First Amendment limits courts in what they can do even in lawsuits between private people. For instance, it prevents courts from awarding damages for defamation to a public official unless that official proves that the defendant knew the defamatory statement was false or was recklessly indifferent to whether it was true or false. The doctrine of prior restraint is also based on the First Amendment, so judges can’t prevent the publication or broadcast of damaging information before it is published/broadcast.

‘Eve’, in honor of the first woman who ever tempted a man?
‘Jezebel’, worshiper of false prophets?
‘The wife of Lot’ who was unnamed but turned to salt for her sins?
‘Mary Magdalene’, temptress of Christ?

Looketh thou towards the Bible, for it is full of sinful women.

but to see how much the question one recall gap has closed.

Or opened. Haven’t most of the in person votes been counted and now we wait for the last of the mail-in votes that made the deadline and have a week to trickle in? And don’t mail-in votes tend to favour Democrats?