This article is part of TPM Cafe, TPM’s home for opinion and news analysis. It first appeared at The Conversation.

Interesting article. It seems at least some white evangelical Christians are willing to admit racism is sinful, but refuse to acknowledge that sinful people can work together to create institutions designed to advance their sinfulness. How convenient.

Yes, I agree that we should work to change the hearts of each racist, but we should also recognize the damage past racism has created and do what we can to eliminate the structures used to advance that racism by the sinners. If we don’t we are endorsing the results of the very sin we seek to end.

CRT is schools would be more readily accepted, if only it was balanced by teaching many slaves led a pretty cushy lifestyle and wouldn’t have agreed to their freedom were it offered them.

”Essentially, evangelical morality sees social problems such as racism as the result of sinful individuals, not larger structures or institutions.”

That’s actually kinda bullsh-t, because it implies they see racism as a “problem” to begin with.

(Or, at least pink on non-pink racism.)

Never forget that “Christian values”, at least for GOP voters, doesn’t equate – as lazy pundits endlessly assert – to the simplistic idea of “anti-abortion” or even to anti-LGBT, anti-Islam, or anti-secular.

Even after Roe, evangelicals were largely apolitical. It wasn’t until the tax-exempt status of segregated religious schools vanished that they woke up to politics. (Bob Jones University v. United States, 461 U.S. 574.) Then, suddenly, the “Religious Right” and “Moral Majority” burst onto the scene.

There’s a reason 99% of “White evangelicals” opposed Trump’s impeachment – while 86% of “Black Protestants” disapproved of him. Racism was at the heart of the Megachurch-American love affair with Reagan, and it continues today as their increasingly-less-unspoken unifying principal.

“Essentially, evangelical morality sees social problems such as racism as the result of sinful individuals, not larger structures or institutions.”

I know we are on the same side here, but I don’t love how this is framed. It makes it sound as if evangelicals are in general in favor of viewing social problems as residing in individuals rather than larger structures—as if this were their overarching view. But this is not at all how they approach issues they actually care about. Is the supposed discrimination against Christians treated as sinful behavior by individuals? No! Here it is absolutely seen as systemic and only addressed by changing the laws. Likewise abortion is not treated as a matter of private sin.

The point is that the “argument” by evangelicals against CRT is thoroughly disingenuous. Whether most evangelicals actually view racism as a sin is unclear. What is clear though is that they are doing their best to cover their eyes and deny its existence.

There’s a reason 99% of “White evangelicals” opposed Trump’s impeachment – while 86% of “Black Protestants” disapproved of him. 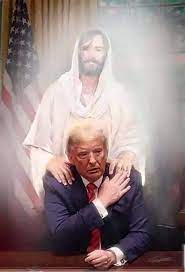 The fact that Jesus was white probably factors into this, also.

It’s par for the course that these religious institutions would try to stick their heads in the sand regarding systems of human interaction. It’s easier to blame God blame people’s insufficient devotion to God for the ills of society, than to acknowledge that people living together tend to influence each other’s behaviors.

If you accept the idea that people’s actions can be modeled and predicted, it does put a crimp on certain theories on free will and individuality.

Looks like we had the same reaction to this article. But you (a) beat me to it and (b) made the point better and more forcefully than I did. Bastard!

Great article. Call it “white fragility” or just a desire to avoid responsibility for the nation in which we live, but many white evangelicals I talk to are highly reluctant to think about systemic racism. They will gladly agree that racism is terrible. But then turn around and say that because nobody is being denied service at a restaurant, etc., that everything is better now. It is the retreat, I would say, to the relatively unsophisticated Norman Vincent Peale ideas–“The Power of Positive Thinking.” If you are in trouble, you need to look on the bright side.

And some white evangelicals have a great fear of being held responsible for and shamed or found guilty of racism. But as Elie Wiesel said in a different context, you may not be responsible for it, but you must be accountable to it. In other words, don’t ignore systemic racism. You may not have created it, but once you know it is there, you have to think about how to respond as a serious person who knows history and cares about other people in the present and future.

They have traditionally been virulently anti semitic and anti catholic, too, the demographic that produced and still includes “Southern Baptists.”

But they did all solidly vote for the first Catholic candidate for President rather than for the Party of Abraham Lincoln. And they invented and then embraced their particular form of pseudo Christianity in the wake of Brown v Board of Education, So they know when to make exceptions, I guess. Including for syphilitic serial philanderers who hold Bibles upside down during photo ops.

Even after Roe , evangelicals were largely apolitical. It wasn’t until the tax-exempt status of segregated religious schools vanished that they woke up to politics. (Bob Jones University v. United States, 461 U.S. 574.) Then, suddenly, the “Religious Right” and “Moral Majority” burst onto the scene.

That’s a bit of a simplification, but not by a whole lot. The theological/ideological groundwork was being laid for for at least a couple of decades, and it accelerated quite a lot after Nixon realigned the parties. But yeah, it was pretty much losing the tax exemption because they were openly segregationist pricks that put the fundies totally in the bag for the GOP.

Before he lost his mind, Max Blumenthal wrote a really great book about the historical and psychological origins of the authoritarian/fundamentalist right in America. 12 years on, I’d say his analysis has held up really well. I’d still recommend it, though, as noted, he’s since drunk of the kool-aid quite deeply.

Republican Gomorrah: Inside the Movement that Shattered the Party

Though strictly speaking LDS folk are not evangelical, they tend to be lumped in with that persuasion by the media. LDS scripture, 2 Nephi 5:21 states: “Wherefore, as they were white, and exceedingly fair and delightsome, that they might not be enticing unto my people the Lord God did cause a skin of blackness to come upon them.” Without going into more particulars, white, blond, blue-eyed Jesus, white as symbolic of purity, and black as cursed is a deeply held religious belief among a wealthy, tribal people who already harbor suspicions of the federal government because of 19th century persecution, now institutionalized. I consider their position in error, and their fealty misplaced; but I don’t doubt their religious sincerity which I find scary, since I live amongst them, including one side of the family.

Recently I googled Hillsdale college to refresh myself with the late 90’s scandal ridden hierarchy and their relationship to the DeVos family and a number of conservatives.
Now my Google account frequently has ads imbedded from Hillsdale “How to fight CRT in your community”. Featuring an extensive primer.

And they also have a problem with sexual predators.

As leaders decline to act, the numbers grow. In the past 20 years, about 400 Southern Baptist church leaders and volunteers have faced allegations of sexual misconduct, the newspapers found. They were pastors. Deacons. Ministers. Youth pastors....

Whether most evangelicals actually view racism as a sin is unclear.

Jebus said to love thy neighbor, so it really isn’t a problem if your neighborhood is segregated.

I still think it’s hilarious that Mormons are supposed to believe God waited until 1978 to reveal that black people were okay now.

One thing that the article doesn’t touch on is the general evangelical approach to the notion of personal responsibility, something they’ve used in many arenas like healthcare (notions like that it’s your fault because you didn’t choose to eat right and end up with an obesity-related disease) and elsewhere.

If the hypothesis is that some embedded racism in larger society prevents people from advancement, impeding their personal choices and that impact on their course in life, it undermines significant tenets that the evangelicals base their beliefs in.

There was a lot of power consolidation in that movement in the wake of the Jim Bakker PTL scandals as well.

When it comes down to it, it’s all about money & power.

Evangelicals don’t want to talk about racism b/c it’s fundamental to their world view… and b/c they see their “privilege” slipping away, they’re all the more rabid in holding on to it.

About the time when BYU started needing to recruit big Black Southern Baptists to beef up the football team!