Bill Barr Has Done This Before | Talking Points Memo 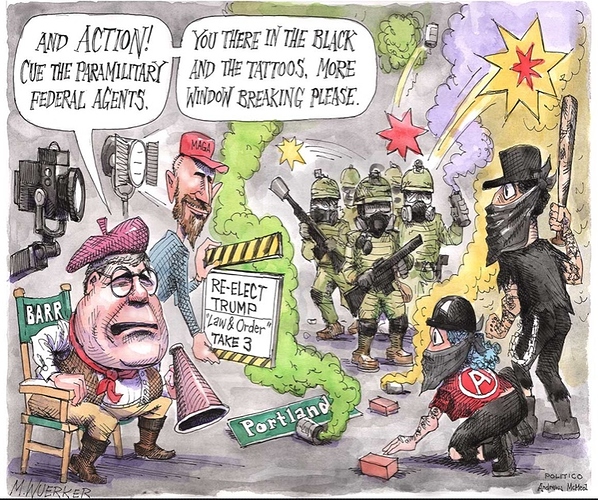 Let us not forget that Barr has also done “covering up shit” before:

In 1992, the last time Bill Barr was U.S. attorney general, iconic New York Times writer William Safire referred to him as “Coverup-General Barr” because of his role in burying evidence of then-President George H.W. Bush’s involvement in “Iraqgate” and “Iron-Contra.”

Now Barr is covering up Trump’s Russiagate, Ukrainegate and who knows what else! 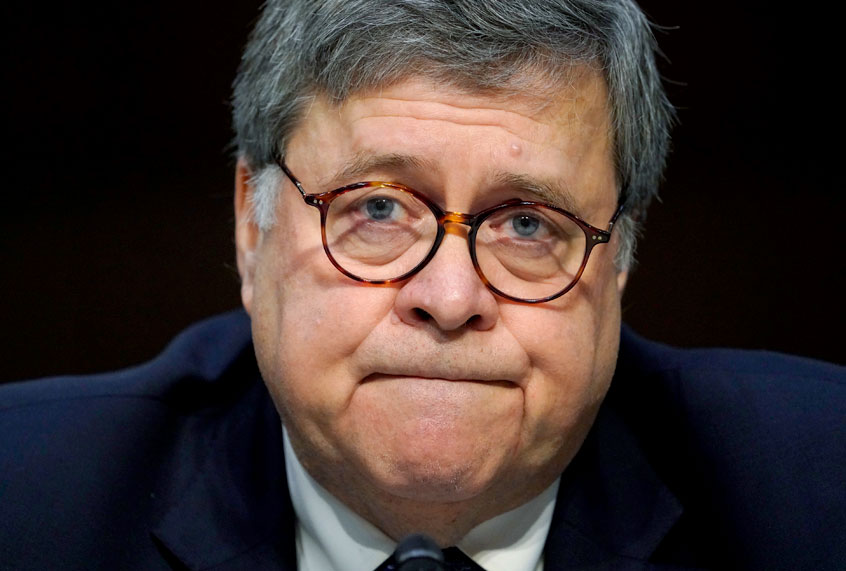 This time, Barr buries Mueller’s report and cherry-picks fragments from it to justify Trump’s behavior

Relying solely on aggressive law enforcement–and not very good law enforcement at that–to solve the problem of violent crime, gangs and drugs, is sort of like trying to cap a volcano so it doesn’t throw out lava. Might sort of work, for a time, but it doesn’t solve the underlying problem, which is what creates and promotes violent crime, gangs and drugs.

Of course, these Repubs aren’t interested in actually solving such problems. They just want to seem to be solving them, for political benefit, and maybe reducing the most outward effects of violent crime, gangs and drugs. Because Repubs don’t actually solve problems. They either create them, pretend to solve them, or pseudo-solve them with shortcuts and drastic measures.

Trump and Barr are the perfect leaders for today’s GOP. One’s smarter and smoother and knows how things actually work, but both are deeply corrupt bullies, liars and thugs who care only about power, domination, and saving their gynormously fat ugly asses.

And the public generally agrees that Trump/Barr’s ideas are bad. 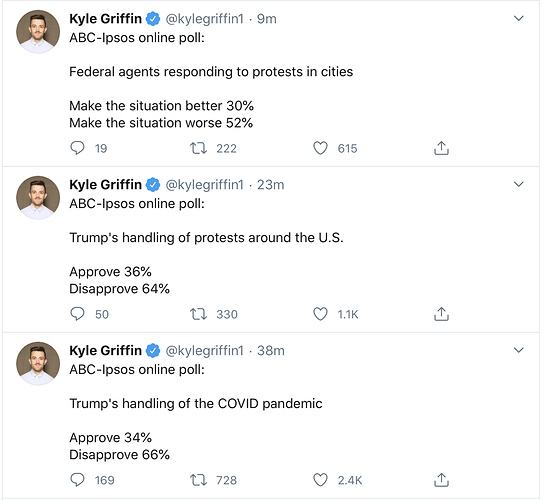 A Biden administration, backed up with a Democratic Congress and full of people who understand social justice instead of just cracking skulls, has a real chance to make a difference in the things that really cause inner city violence. And, with the BLM movement, there is a growing mandate to take those avenues instead of just sending more cops. It’s a moment that needs to be taken advantage of, and I think they understand that, which gives real hope, maybe for the first time in several generations, that real efforts will be taken to solve these problems instead of just one more attempt to put down criminals…a path that leads back to Jim Crow and slave patrols in attitude. It’s time for a change, in so many ways.

“Our message to gangs, gang leaders and gang members is this: When we throw the federal book at you, it will be a knockout blow,” Barr said.

I understand that Chicago may be heading toward the highest annual number of gun-related deaths yet - surpassing 778 in 2016.

But according to the Cook County website, Chicago has had 2240 COVID-related deaths in the past 190 days. Appears that the Feds like to beat people up but are not so interested in actually saving lives.

1992
In 1992, Barr said the FBI was shifting about 300 agents from monitoring spies from the recently collapsed Soviet Union to taking on gangs and violent crime in American cities.

2019
On Barr’s public financial disclosure report, he admits to working for a law firm that represented Russia’s Alfa Bank and for a company whose co-founders allegedly have long-standing business ties to Russia. What’s more, he received dividends from Vector Group, a holding company with deep financial ties to Russia.

And Mueller was his assistant in 1992. An assistant he thought was less than brilliant and needed guidance. Mueller and Barr started the investigation into Whitewater and got the ball rolling. Of course, Barr was the alpha of the two. Barr was counsel for GTE, a small communications player that eventually became Verizon while Barr was still their attorney. He’s worth at least 40 million.
Added:
Barr was responsible for passing over Kenneth Starr for the SC and instead picking Souter because Barr thought Starr was too “Squishy” . So he does make mistakes.

More than you ever want to know about Barr: 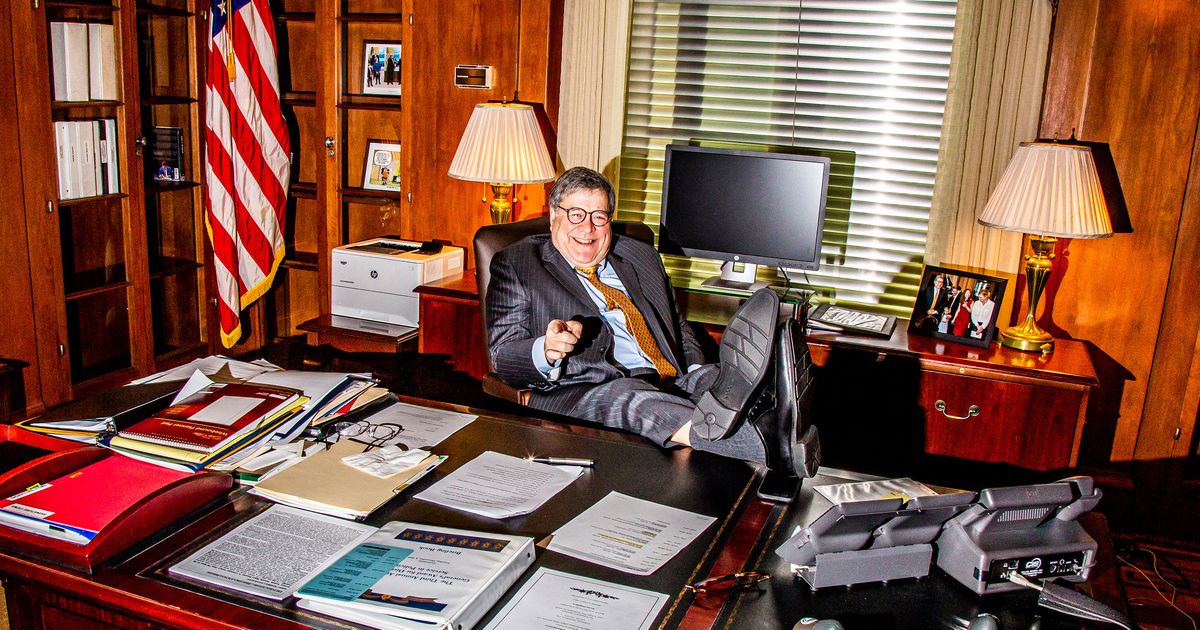 The Attorney General is exercising the full force of the Justice Department to defend a president in crisis.

He’s worth at least 40 million.

So he has more money than tRump.

That’s why, when the Trump admin put forward Barr’s name for AG, I was surprised that so many legal analysts thought he was a reasonable choice.

He’s worth at least 40 million.

A Biden administration, backed up with a Democratic Congress and full of people who understand social justice instead of just cracking skulls, has a real chance to make a difference in the things that really cause inner city violence. And, with the BLM movement, there is a growing mandate to take those avenues instead of just sending more cops.

You’re quite right that Biden will begin to cease so many of the wrongs being perpetrated today by t rumpp’s gulag squads, but much more to your point, I honestly see much greater progress in addressing the underlying causes of systemic racism and the foundations of economic inequalities by our next VP who assumes the role of POTUS after Biden’s term is over. Biden will right the ship in so many ways, but as much as I hate to say it, progress is unfortunately slow, and I see his successor doing more to advance the cause of social justice that Biden, himself. Not that he won’t move in that direction, but from the position of Commander in Chief, there is a galaxy’s worth of damage to repair once he takes office. Overall, though, the future looks sooo much brighter under prolonged Dem leadership and control than anything we’ve suffered through over the last 4 years. We will finally begin to address these issues in the very near future.

advocates say there are better ways to prevent violence

Hint: preventing violence is not the point.

I think I saw this movie. It was called The Untouchables or something like that.

JFC. At first glance, I saw the picture and thought, “What the hell has Alberto Gonzales done now?” I had forgotten that Billy Barr wasn’t always the porky guy we see lately, and I did remember vividly the good old days when another Attorney General who looked very much like the young Barr was accused of politicizing the Justice Department.

That brought back unpleasant memories of the last Republican president’s AG under scrutiny for firing of US Attorneys, bending first one law and then another, protecting the guy in the Oval Office in countless ways, many of them of questionable legality. I recall James Comey and Robert Mueller played starring roles in that ongoing saga.

The difference between then and now was that prominent Rebublicans in congress voiced objections to the actions of that AG. And Alberto Gonzales finally resigned.

It’s the middle of summer, but this is Groundhog Day.
https://www.politico.com/story/2007/04/mccain-calls-for-gonzales-to-resign-003714

Another great story from ProPublica.

Appears that the Feds like to beat people up but are not so interested in actually saving lives.

I have to say, this behavior by Barr is not surprising. I’m sure I can’t be the only one who is not surprised by how things are turning out. Why would anyone think he’s changed in 28 years?
He hasn’t even learned any new moves!