This article is part of TPM Cafe, TPM’s home for opinion and news analysis.

On Thursday morning, Major League Baseball (MLB)’s owners locked out its players, sending the sport into its first work stoppage since 1994. The owners and the players union were at a bargaining impasse over how to share baseball’s growing revenues and profits. In the five years since the last collective bargaining agreement was signed,  players have received a declining proportion of their teams’ revenues, which come not only from ticket sales but also from local and national television deals, real estate development, publicly-funded stadiums, and, most recently, gambling.

This article brings back a flood of boyhood memories.

The heartlessness of big business and the Supreme Court is an American tragedy.

That’s an inevitable consequence of Capitalism.

The players play in community-built stadia, supported by ticket sales and millions of TV subscriptions to cable and special networks, as well as MLB-approved merchandise, How about the movie stars (players) and the producers with the big cigars (owners) figuring out some way to give enormous sums back to people who support them? It really shouldn’t be that hard. Unless, of course, you are a selfish prick.

There I was a Canadian at a time when Toronto only had a second tier baseball team. Naturally I watched as many games on TV as I could. I had many heroes, Curt Flood was one of them. I had other heroes as well. There was something about him that stood out but as a kid, never really thought about it much. After reading this story I looked him up and maybe this is what I saw in him and connected. Something that probably no one knew.

Jim Chambers, Flood’s art teacher in junior high school, was impressed with his skills with a brush and pencil and attempted to develop in him a broader appreciation for his talents. “Before I met him, I sketched and painted but had not the slightest sense of the larger significance of art,” Flood said. “…He taught me art not as technique alone but as one of the great resources of the human spirit.”5 As a teen, Curt created the artistic backgrounds for school proms and plays. He also earned extra money designing storefront window displays and advertising signs for a furniture store owned by Sam Bercovich. Later on in St. Louis, Flood received recognition for oil portraits of Cardinals owner August A. Busch, Jr., and Martin Luther King; the King portrait was presented to King’s widow, Coretta Scott King, who years later gave it to President George W. Bush to hang in the White House.6Teammates and other players around the league also commissioned family portraits from Flood and called him “Rembrandt.” Flood later explained, “Baseball and painting make a good balance. Baseball is virile. It’s rough and tough. Painting is sensitive; quiet. It’s an outlet to overcome tension.”7

Flood should be in HOF, but his playing alone would only get him into what Bill James calls The Hall Of The Very Good. His HOF # from Bill James is 59 (average to be considered likely for HOF is 100). His career was a little too short, he played at the same time as the greatest outfielders in history (Mays, Aaron, Clemente and to a certain extent Richie Ashburn), he never won MVP and he did not hit for power. He should be in anyway, but those are some powerful headwinds.

I think Flood will get in eventually, but he should probably be put next to Phil Rizutto, Richie Ashburn, Joe Torre and Ron Santo, whose careers as broadcasters, managers and household names after they retired brought them in (after decades)

Again, I think it’s wrong that Flood hasn’t been in for the last 15 years, but those are the criteria that many voters use in determining HOF membership.

Team owners are still whining about 2020. It will be interesting to see the numbers when they’re final on this year. 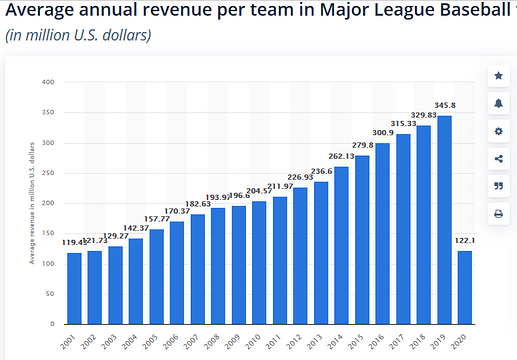 And here’s a look at the billions in profit they’ve made.

In their battle to reduce 2020 player salaries during the coronavirus pandemic, MLB owners say they barely made money the past ten years. Forbes data shows profits have tripled.

Forbes’ estimates have MLB clubs in the black at an average EBITDA of $800 million for the past decade. Forbes ’ profits include those from non-MLB events in cases where teams operate the stadiums, collect that revenue and are responsible for those expenses. They do not include profits from team-owned regional sports networks or mixed-use developments around ballparks.

In 2020, owners pitched a different picture. In its presentation to the players, MLB said cumulative annual earnings before interest, taxes and depreciation (EBITDA) have been within $250 million of break-even since 2010. This was their pressure to make the players give up more so that there could be a shortened season.

Really? While the name “Veterans Committee” may have been less than optimal, the selection of this dumb name for the process of selecting recognition of individuals in Baseball’s past history serves to underscore how far the once “National Pastime” has drifted from the hearts and minds of the society at large …

The name sort of shouts out “Our best days were over a half century ago”…
… it conjurers up images of a bunch of old farts sitting around microscopically debating the minutia of 50 -to- 70 years ago and waxing poetic about that “GOLDEN ERA” as the lost “glory days” … Sort of like a bunch of 70-90 year old war veterans bemoaning the fact that their days in combat when they were in their 20’s were “the best days of their lives” and the decades since have just been progressively worsening sucky sacks of crap.

Baseball is, and has been, decaying … it is, in many ways, out of step with today’s world … oh, it will continue to exist … but in all likelihood, its best days are in the rear-view mirror - and way in the distance behind us… and Baseball Ownership is so obsessed with near term revenue streams that the reinvestment and costs required to put in place a long term course correction simply will not happen -

If George Steinbrenner is inducted before Curt Flood then you can assume that the Hall is a corrupted institution. So far he’s been rejected four times. He was pardoned by Reagan in 1989 for Nixon era campaign finance violations and had his right to vote in restored in Florida almost immediately. No Jimmy Crow for him.
As far as former MLB commissioner Bowie Kuhn is concerned he was inducted into the hall given how Flood was treated.

Primarily of ‘greed’. You are right to connect it this way as well.

Curt Flood was a very good, but not great player. He should be in the HOF, but 99% of that case is the impact he had with his litigation (the thing that’s keeping him out). On the field accomplishments don’t get him there, but the MLB HOF specifically says it considers off the field context and has used that excuse to exclude players like Pete Rose and include players who didn’t get a chance to fill out all the counting numbers they like (like former negro league players and players that lost years due to war). So them keeping him off the ballot because analytics say he isn’t on the level is completely inconsistent. It requires you to ignore his other contributions to the game, which they don’t do when they don’t want to.

It is as if the MLB team owners are saying "take our offer, or the black guy gets it! Counting down the seconds until Gym Jordan weighs in…

Curt Flood should obviously be in the Hall of Fame.
Baseball is deep for me. I grew up in the tiny place that Walter (Smokey) Alston called home. He was the manager of the Dodgers from 1948 to 1975. He was a close bud with my dad and I knew him well as a kid. A relative of mine was Kenesaw Mountain Landis who was the first Commissioner of the MLB. This image was in my bedroom as a kid… 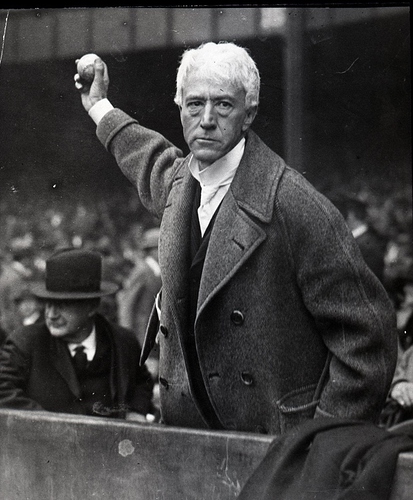 There is something wrong with your comment. It is counterintuitive given that physical intelligence is highly regarded by many people. I would need to know what you mean by “things like…”. What other things? What types of activities gain your interest and approval?

It requires you to ignore his other contributions to the game, which they don’t do when they don’t want to.

He is being shunned by the same ‘types’ that support Trump and the cabal of corporatists who believe they and ONLY they know what is ‘right’ for America…and you’d better not push them.