Reports: Durham Said To Be Seeking Indictment Of Lawyer At Firm With Ties To DNC

Even the commenters over at redstate.com are getting frustrated that the wingnut media keeps feeding them BS that never materializes…

Can you say “witch hunt”?

Ha, maybe Durham isn’t getting any of his invoices paid by TFG and this is a shot over the bow that doesn’t look that way to the general public.

This sounds to me as nothing more than a way for Durham and his handlers to get “DNC” and “inditement” printed together in the same news story. You know, the issue of concern isn’t Trump/Russian collusion, but DNC being indicted for something something.

I shot JFK. I wasn’t even born yet but still, I was the one. Oswald was a red herring.

I also shot the sheriff AND the deputy. Might as well, I thought.

gotta be a Q drop in there somewhere, revive the "he’ll be sworn in on…

I’m sure there was a Chinese Wall between the political group and the cybersecurity group at the Perkins Coie law firm, and Sussmann had nothoing to do with the Clinton campaign. Thus, “working secretly” for the campaign is all Durham’s got. So secretly even Sussmann and the campaign didn’t know about it, nor did anyone else.

Why is Durham even still at DOJ? Were this a GOP administration he’d a been gone day one. Can’t anybody here play this game? My cousin in Trinidad won’t get the vaccine cuz his friend got it & became bearded. His mustachticles became swollen. His friend was weeks away from issuing a warrant, now the grand jury called off the indictment. So just pray on it & make sure you’re comfortable with ur decision, not bullied.

A grand jury typically sits in continuous session, meeting two or three times a month. See https://www.utd.uscourts.gov/sites/utd/files/grandjuryhandbook.pdf. So there’s always a grand jury session available a week or so away. A prosecutor has great control over a grand jury presentation - obtaining an indictment is sometimes described as “rubber stamping” - so hopefully Durham will be subject to the supervision of a career DOJ attorney who cares about the impartiality and integrity of the DOJ.

Baker doesn’t actually remember it. He’s testified to lack of memory. But according to the Times: 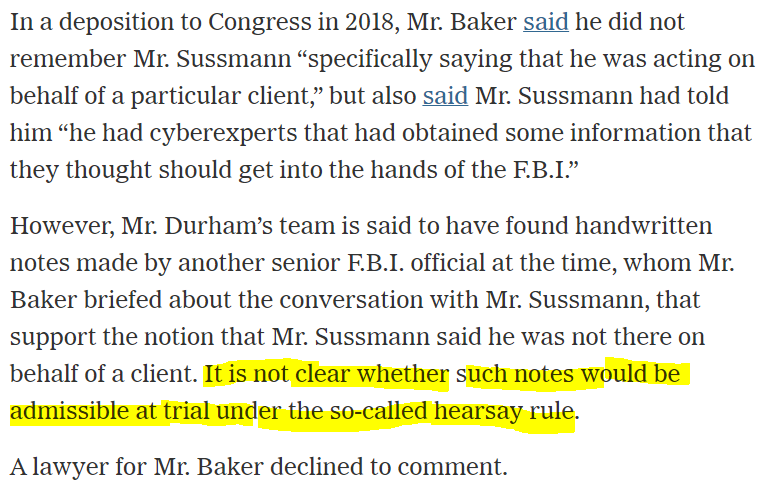 FFS. It’s complicated, but it isn’t unclear. How in the fuck he thinks he can possibly have probable cause based on hearsay notes by someone who didn’t witness the crime that impeach the prior testimony of the person who the alleged lie was told to is beyond me.

Wait, this is still a thing?

Symbolic Interactionism is a division of the social sciences.

Among other things, it goes into symbols, how people create impressions upon other people and the like.

Durham has obviously used this scary-face hustle a great deal

Yes… because when a “special prosecutor” appears to transition into a sort of bad cop looking to fulfill some sort of ticket-book quota… or simply to construct a case to “hang” on a particular pre-designated target … there needs to be a thorough examination of said prosecutor’s veracity & motivations & agenda.

FBI not looking good these days.

Kavanaugh - non-investigation
Women Gymnasts being sexually abused - “Is that all?”
FBI guy “yeah…I remember something I can’t prove”…
And whatever else.

Not a good look.

FBI Director Comey’s FBI “ultimately decided the information had no merit. When Mueller took over the investigation he didn’t include it as part of his research.”
(quote from rawstory)

Those notes are hearsay, and I can’t think of any exception that would get them in as evidence. They might be used to refresh Baker’s recollection, but if he still doesn’t remember it that way, it’s not going to be evidnce.

So yeah, this is even stupider than I thought.

ETA: The notes could be used to impeach Baker for saying he doesn’t remember it that way, but that’s still not any affirmative evidence that Sussmann lied.

ETA2, 5 hours later: Having seen the text of the notes in the indictment, they are probably admissible not for the truth of the matter asserted, but instead to show that DOJ had notice of all the relevant people and entities he was representing that the indictment no say Sussmann should have disclosed.