How Many People in the U.S. Are Hospitalized With COVID-19? Who Knows? | Talking Points Memo

There are some people, alas, who would be fine with that. Especially knowing (or believing) that others they don’t like would have the same requirment.

Double or triple all the numbers put out by the administration. That would be closer to reality. Skepticism has served me well. 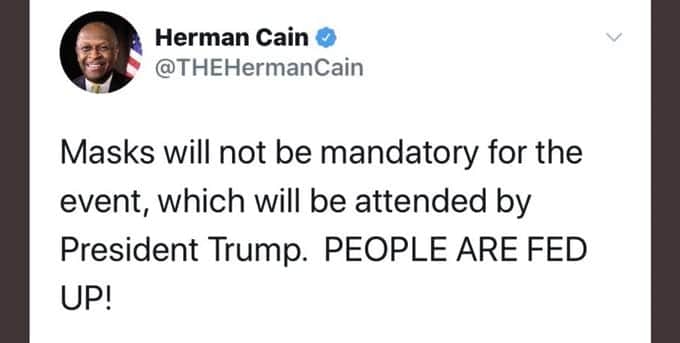 “Y’all remember when the Current Occupant of the Oval Office, and “America’s Mayor”, and C.Christie, and the whole of Right Media (as reported in this paper) said that by following the advice of Science and Public Health, as opposed to brain dead border closures and other “common sense”, counterproductive but satisfyingly cruel measures, would kill us all?Right before the off year election? Ebola?
And predicted the thousands of death and the recession that didn’t happen?

The first weekend of this January, the first press reports of a new influenza like disease in the Chinese city of Wuhan appeared in the BBC, and the Asian press . My Marine buddy Harley called me, and we discussed this a possible economic problem.
By March he called it at 150K deaths of COVID19 by the end of July, passed on expert predictions. He called me yesterday crying that so many folks in his town of Toccoa,Georgia are refusing to wear a mask and acting like wearing a mask is somehow wrong,unpatriotic, and giving him grief over doing so. I mean loud, bullying, redneck abuse.
He’s a Gulf War vet, with many heath issues from his service. Family is abusing him for supporting anti pandemic measures.
His tears are for the soon to be dead, the ignorant and the innocents they will infect…
I have friends who are unfriending me (in real life) because I said COVID19 isn’t a hoax, or Chinese plot, and Dr.Fauci and science should be in charge of the effort to end the pandemic.
Herman Cain politicized his response to Covid, and didn’t wear a mask at Tulsa, choosing to be comfortable, and listen to the President. It killed him…
They are choosing Cain’s path, and doing what Cong.Gohmert has done.

We’re just old guys with Internet, and don’t see how this will get better without real leadership and now, many more inevitable deaths.”

Our decentralized system of gov’t has been helping us somewhat in this pandemic. No one that is tracking Coronavirus cases and deaths was using the CDC as the primary source. They’re getting it straight from the counties/hospitals.

How Many People in the U.S. Are Hospitalized With COVID-19? Who Knows?

I guess if we don’t know, it isn’t happening.

Right. Of all the things that they try to hide this seems to me to be a lot more problematical than some. Hospitals know how many of their beds are in use and there is nothing keeping them from telling whomever asks.

My Uncle died from COVID yesterday. He caught it in Austin, TX. Fuck Abbott, Dan Crenshaw and that dip shit Lieutenant Governor.

So sorry. They all deserve to spend a long time in the contemplation of their crimes.

I am so sorry @khyber900. We are here for you as you have been here for us for such a long time. Mes condoléances.

Simple and yet so complicated and with such devastating results.

I am so sorry for your loss.

I am so sorry. May eternal light shine upon him.

Sorry to hear about your Uncle’s death. Best to you and your family!

Sorry for your loss.

My condolences to you and your family

My Uncle died from COVID yesterday. He caught it in Austin, TX.

That is heartbreaking. I’m very sorry to hear that.