It ain’t gonna work this time, Wayne Baby. You’re going up against the gays. We’ve survived everything forever, and as far as we are concerned, you are about as significant as a crushed roach on a tile floor. You managed to skate after children were killed at Sandy Hook, and a congregation of black people was slaughtered by Dylan Roof. But we NEVER forget. You’ve never dealt with anyone like us before, NRA, and you are going to pay dearly for your recklessness towards human life in the name of the profits of gun manufacturers.

First, it is not politically correct. It is just correct, and if you are not correct you are wrong, and the NRA is wrong. Second, if you abet the availability of weapons to individuals on a terrorist list then you are abetting terrorists. That makes you an accessory to terrorism or for all intents and purposes a terrorist yourself Mr. Cox.

Er…what exact political correctness is he referring to here? Is he saying that normally the US locks up anyone professing to be Muslim and that Obama’s holding back from doing that because he’s just being PC?

YES, let’s go back to the “good ole days” when cowboys would wear guns on their hips and have gun fights in the streets. Ah yes; those were the GOOD ole days, weren’t they?

“Unfortunately, the Republicans political correctness prevented anything from being done about it.” Fixed . /s

I’m kind of stunned that no one seems to be noticing that they are officially outing themselves as fascists this week and Orlando is their Reichstag Fire. Bring back HUAC? Revoke citizenship based on beliefs, religious affiliation, or race? Terrible Things are happening because Obama has abandoned important “intelligence tools?” Natural born U.S. citizens deemed “foreigners” and enemy aliens because they’re only first generation Americans (and never mind that the Leader is one himself?) Democratic (small “d”) values denounced as weak and decadent? Trump saying over and over again that we must be “strong!” in the context of doing blatantly fascistic things like putting Mosques under surveillance. Oh, and then we have the followers who are now calling themselves “Red Hats.”

It’s like there’s some Downing Street Memo phenomenon going on where the MSM doesn’t feel like it has to take the hard decision to acknowledge and report a story because, hey, everybody already knew it even though we never actually reported it, right?

Another day in the Wiemar Trumpublic, another day closer to the New Order if we don’t wake up and recognize the stakes.

I am a former US soldier, and grew up on a farm. I own 7 firearms, including an AR-15 I purchased after getting out of the Army (because I was so familiar with its cleaning and operation).

I personally support much stronger gun laws. Background checks? I can pass them! Mandatory classes on gun safety? I have taken several and think everyone should. Government registration and licensing of firearms? Absolutely!

It boggles the mind that you have to jump through more hoops to own a car than a firearm. A car has all sorts of life-necessary uses. A gun is a tool for a hobby… I like guns, but the fact that they end the lives of so many means that my personal like of guns doesn’t outweigh the public good.

Oh, and by the way, the military, which arguably knows guns better than anyone in this country: keeps all official firearms under bomb-proof lock and key at all times when not in active use; registers and serial numbers each of them every time you check it out, for tracking purposes; tracks every round of ammunition and performs rigorous checks to ensure spare ammo is not smuggled off the range; ALLOWS NO personally owned firearms in the barracks, REQUIRES personally owned firearms in homes on post to be registered with the post MPs and your commander to be informed anytime you intend to transport the gun across or off post to go shooting or hunting. That’s to say nothing of the HUNDREDS of hours of safety training we go through to ensure we use our weapons accurately, responsibly, and as safely as a device designed solely for the taking of human life can be.

Why? Because we know better than anyone that guns kill. It’s why we have them, and it’s why we do everything in our power to ensure that they only have the opportunity to do so under specific, controlled circumstances.

Sure. Just plug-in the Republican talking points du jour for every gun related issue.
Is Roger Ailes coordinating with the NRA now?

Check out the chart in this article.comparing gun deaths per capita in different developed nations. 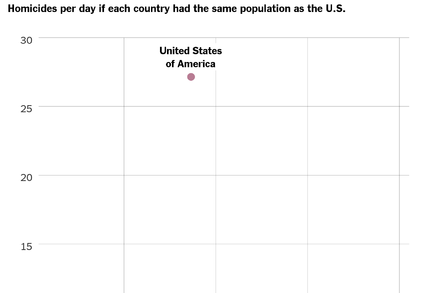 Comparing Gun Deaths by Country: The U.S. Is in a Different World

In most advanced countries, gun homicides are as rare as deaths from falling tree limbs or plane crashes.

When there are shootings in places with stronger gun laws, the NRA argument that weaker gun laws would have allowed armed people to stopped the shooter are hypothetical “what if” scenarios. They assume that the armed bystanders don’t get themselves killed as did the guy in Vegas, mistakenly shoot the victim as in Houston, or fail to identify the shooter as in Tucson. It also ignores the nonuniformity of the law and the ease of transferring arms from weak gun law jurisdictions to strong gun law jurisdictions.

In this case, we can draw a direct link to weak gun laws enabling the shooter to easily buy a weapon in a configuration that allowed him to shoot continuously for a long period of time. The NRA active promotes selling such weapons, and obstructs background checks, gun tracing, and other law enforcement and crime prevention policies.

I always find it funny they try and point out nuance on their side but ignore the other. The guy was on the no fly list and investigated before. That is true, so how was he able to legally buy a gun? That has no impact on law abiding gun owners. If they are worried about people getting thrown on that list than what should be done is a clear legislative system establishing to get off of the thing or under what grounds to put somebody on it and or both. Nobody is doing that.

A security guard license is well and good, I do not know what goes into that, but assuming a background check is required and the guy has no previous crimes than it is not a shock to anybody that he should get one or a job. One could say that because he is on the no fly list the person should not have a job but that is going too far.

Political correctness has nothing to do with this at all, the president say radical islam would not make the issue go away. The issue is that there is no easy way to stop any of this. And the GOP really just wants to use a sledge hammer to make it look like it will do anything more than potentially enflame the situation. I do not agree with Obama on every foreign policy issue but at least he seems to understand the complexity.

As for the other gun cases. The killings in France were largely because it is easy to get guns in neighboring Belgium. Much like in the US, if the gun laws are stricter in Illinois than go to Indiana. It is an example of why patch work does not work.

And the primary goal of gun control is not to prevent every single gun crime. It would be nice if it would, but even arming everybody would not prevent that either. It is to hedge percentages. If it is harder to get a gun or various warnings go off along the way it adds points of pause to the would be shooter and also alerts authorities. They are potential stopping steps. That the US already has loads of guns means that guns will be available with these safeguards but that does not mean we should not do them.

That gun rights are held by some to be the most important right is stupid in the highest degree. If guns are tools as claimed than they do not matter that much in the grand scheme of things. Not to mention they need restrictions as they take away lives easier than anything. As that was in their design.

“Yet his former co-workers reported violent and racist comments,”
Well, if THAT is your litmus test for gun purchases your entire constituency would be excluded (which is fine by me BTW.)

We need to make copies of your post and read it to everyone who opposes common sense gun legislation. That or roll it up and beat them upside the head until they get it.

Well that probably covers almost every gun owner and definately every NRA member.

If they ban people that make these comments from owning guns the manufacturers won’t have any customers anymore.

What exactly does Cox think should have been done by the FBI with this guy? He hadn’t broken any laws when they were looking at him, and they can’t maintain 24/7 surveillance on everyone suspected of radical ties. There are going to be lone wolves.

Short of throwing over the Constitution, the only action that might have been effective would have been a greater restriction on access to guns. We can only speculate as to what would have happened if this guy wasn’t allowed to purchase a legal weapon. I suspect that most of the recent mass shootings that have taken place in the US involved individuals who wouldn’t have known how to acquire an illegal gun.

Motto: Good for me, not for you.

Think about it - a huge crowded nightclub at two a.m. where everyone is good and loaded, where it’s dark and very loud with flashing lights everywhere - then imagine that half-a-dozen in the crowd were packing and started firing at where they thought the shooting was coming from. That would surely guarantee a positive outcome.