Discussion: McConnell Pushes Back Funding Vote But No Deal With Dems Announced Yet

(McConnell had previously promised Flake an immigration vote in January for his support for last year’s GOP tax bill.)

Exactly. If McConnell’s promises to his own members don’t mean jackshit, why the hell should we assign any credibility at all to an even weaker statement of his alleged intentions, directed toward the opposition party.

I would love to see Congress pass a measure the 1. Raises the debt ceiling for at least 3 months 2. Reinstates DACA and 3. Creates funding to build the wall SO LONG AS Mexico agrees to pony up half (though Trump promised 100%). If he blocks it, it will demonstrate to his racist supporters how much his word is worth.

Fund the government for 18 days? Really?
I remember a time…before the GOP ran things …when we had annual budgets. What an amazing thing it was.

A few options here for the Dems:

If Schumer can get these pieces, then I think supporting the temporary CR would be a good step. Dems can claim a win on CHIP, which is vitally important for Doug Jones in '20 and all red state Dems, as defending health care is the reason they’ll win re-election this fall.

If Ryan fails to signal a commitment, then Schumer should hold out until he gets something firm from him.

Dems will also retain leverage to force a vote on the Dream Act and if the GOP breaks its promise, it will be difficult for the GOP to spin it in their favor when the gov’t shuts down again.

Ultimately, I think the goal for Dems is to extend CHIP and to break the GOP on the issue of deportation or make them pay the ultimate political price for pushing deportation. Deportation is a prelude to aggressive measures against the non-white citizenry which will lead to disenfranchisement, revocation of citizenship and a police state existence.

The point is to fight and get the wins you can. Dems cannot promise or guarantee results in the minority. But they can fight like hell and make people understand that if they want to save the Republic, they have to vote Dem. GOP governance (and perhaps its existence) is incompatible with a constitutional Republic.

@khyber900 Ryan is being extremely weaselly. He only wants to bring the Goodlatte bill up for a vote, and he’ll call that the compromise legislation.

While it sucks for the workers who will be headed to their offices tomorrow not knowing if they’ll be sent home or not (and for the “essential” personnel, staying and working without pay), there’s one very good aspect of waiting until at least tomorrow to make any deal, even a decent deal – it demonstrates that the Dems are willing, and unified enough, to take the heat of a “real” shutdown, not just the weekend brinksmanship type.

I think the point is to expose the GOP as the racist deportation party. People need to know that the GOP isn’t John McCain. It’s Tom Cotton, Steven King and Ted Cruz. Get the win that’s available on CHIP. Fight like hell for DACA and set up the GOP for failure if they fail to do the decent thing.

I can’t help but think of any DACA recipient(s) in the crowd Pence used for a photo-op today. These people are holding children’s health insurance (and the places where that insurance can be used) and the residency of top-notch Americans hostage. It’s loathsome.

I wonder what the deal is? Something like we will have a vote on DACA before February 8?

McConnell promises not to snap at anybody’s fingers for a while…maybe.

I don’t know how familiar you are with the Mexican border. There are tons of surveillance methods along the border from cameras to radar equipped blimps. And walls. Lots of walls. 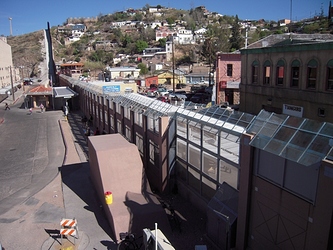 In the last 10 years the net number of people crossing illegally is at zero. As many go back as get in and the number of crossers is vastly less than it used to be. I know. I’ve lived near the border for 50 years.
Walls are statements of separation This wall trump wants will not keep people out. Or in for that matter. The Berlin wall failed. So did the Great Wall of China. Trump’s wall will be no better. The point of it in trump’s mind is to keep America white. He fears brown or black people. He wants a wall because he is a racist at heart.
One other thing. Mexico will not pay one Peso toward the building of this wall

[quote=“darrtown, post:10, topic:67569”]
I remember a time…before the GOP ran things …when we had annual budgets. What an amazing thing it was.[/quote]

Well, continuing resolutions have been with us for a while.

Going back as far as the mid-'70s, there have been only four years in which no continuing resolutions were required. (ETA: In some of those years, much of the budget was done on time but CRs had to be passed to cover the portions that were not yet completed.)

You look not that far back on deals that Obama made and realize just how competent at his job he was.

Trumpp hasn’t made a single deal yet and its not looking good for the future.
The true art of a deal is the art of compromise and compromise is governing. 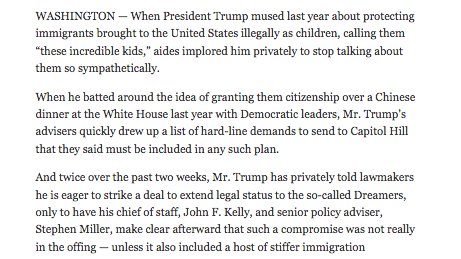 Thanks Obama, opps I mean Trump.

In a floor speech announcing the schedule change, McConnell laid out an offer promising that the Senate will vote on an immigration bill if there is not a larger immigration deal between the Senate, the House and the White House by Feb. 8, assuming that there is not another government shutdown then. He also offered to vote on a spending bill on those terms at 10 p.m. ET Sunday night.

Well that is a lot fo convoluted horse-shit coming from a liar who never keeps his word (ask Collins he her “promised” ACA stabilization vote disappeared never to be seen again?).

They could pass a clean CR with DACA and CHIP funding tonight with a veto-proof majority. But McConnell is too much off a lying scum sucking piece of shit to bring it to a vote.

There was another attempt but he Democrats, this time by Sen. Duckworth to pay the troops during the #TrumpShutdown but the GOP leadership again objected.

This is the second time they have done this (first time the GOP blocked it was when Sen. McCaskill brought it up and McConnell objected) and should only underscore and kill the GOP lie that Democrats are preventing troops from getting paid. Cornyn owns the #GOPshutdown:

Later Sunday afternoon, Democratic Sen. Tammy Duckworth of Illinois took to the Senate floor to call for a measure in the meantime to assure pay for military personnel and for military families to receive death benefits despite the shutdown.

“Let’s at least take the simple, commonsense step that we all agree on,” Duckworth said. “Let us remove any possibility military pay and even worse, military death benefits will be used and held hostage as political leverage.”

Neither Side Budges as Day 2 of Shutdown Continues

WASHINGTON D.C.  --  Both sides are refusing to stand down ahead of a tentative Senate vote currently scheduled for the wee hours Monday morning on whether to end the government shutdown. Senate Majority Leader Mitch McConnell and Minority...

Get a statement of commitment from Ryan to bring up the Dream Act or compromise legislation in the House by Feb. 8.

The gop is going to wait till the last possible moment to save the daca kids…they are going to attach to a bunch of terrible things dems don’t want and dare them to reject it. Thus making the dems the bad guys if they do and everyone else will see it that way as well.