Discussion: Did The Supreme Court Just Tip Its Hand On Same-Sex Marriage Outcome?

Sorry, just to clarify, you meant respecting the straight people of Alabama right? 'Cuae I’m pretty certain you disrespected the hell out of the LGBT community.

Just to clarify this for you Justice Thomas, this would be like respecting the white people of Alabama, but dis-respecting all the non-white people.

Actually, four of the justices don’t have “minds”: Coke Can Pube, Strip Search Sammy, Tonino, and Umpire have kneejerk political agendas that determine their votes.

Poor Clarence…
He never should have been appointed to the Court in the first place.
He’s in way over his head.

He should stick to not speaking

I love the way Thomas stands up for states rights—which would have kept him from marrying his right-wing harridan of a wife if the Supremes of 1967 had believed as he does.

The near-total lack of logic in his belief system, such as it is, is astonishing and hilarious at the same time.

Well, we all saw this one coming. 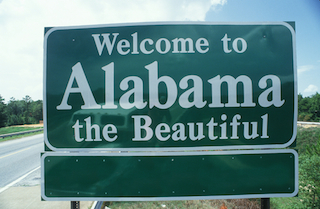 Alabama Couple Files to Hold Judge in Contempt for Not Issuing Gay Marriage...

This one’s for you, Clarence…

Another reminder of how lousy Bush Sr. was, a chip off the old son

Superficial analysis. He’s been a disaster since day one.

For the most part, I empathize.

However, beyond the high probability of this report turning out as an accurate prediction of the majority outcome, there is the one tiny ferocious puff of low comedy, and in addition it may be possible to discern an analogous split, beyond the issues of this case, towards the coming passion play Re the Matter of the Moops.

The low comedy comes, typically, from Scalia’s signing on to Thomas’ antebellum yowl against the Tyranny of federal government beyond War Waging and the logarithmic expansion of our Security State. Scalia’s past opinions touching anywhere near the issues of equal treatment, not just cumulatively but at least twice specifically, mark his resignation that the battlefield of marriage equality was lost years ago - which in turn means that his wanting his name prominent in association with written dissent here amounts to nothing more than the SCOTUS equivalent of deliberately choosing to appear on the dais as the keynote speaker at a Civil War battle re-enactment issues a prolix lament on the actual outcome at Gettysburg.

But leave aside Scalia’s support: why would even Thomas bother putting his dissent in writing in the “first” place? To cover for the fact that the true source of anxiety about the inevitable outcome being badly received by the Base being inclined to somehow blame Scalia for his predictions and his giving in? Thomas certainly has no apparent need to express this dissent - but Scalia has discernible incentive to sign onto one. IOW: Thomas - what a TOOL … again!

My other surmise also derives from the pointlessness of this Learic yowl. Could it be possible that Scalia and Thomas have divined - or Scalia divined and Thomas co-operated - some need to yowl loud NOW as a warning of the bigger whirlwind to come with either or both CJ Roberts and Kennedy deciding against in Re the Matter of the Moops?

Well, Alabama only repealed their law against interracial marriage in 2000, 33 years after Loving struck those laws down. Of course, it was unenforceable from 1967 on, but I think keeping in on the books gives a good hint into the attitude…

This is nonsense. First of all, about half of all decisions are unanimmous. Second, the non-unanimous decisions are quite often across the ideological range. Third, the 5:4 decsions are a relatively small number, even though they quite often contain the most important decisions. Fourth, and most importantly, if you accuse the conservatives in this way, how about the four liberals who are usually found on the opposite side? Would you say that they “have kneejerk political agendas that determine their votes”? Or would you not, just because you happen to agree with their agendas?

Justices have different legal and political philosophies, and these philosophies determine the way they vote. While I certainly would prefer to have more liberal justices on the court, we should refrain from indicting the personal integrity of those who don’t vote the way we want them to.

The only surprise here for me is that Alito did not vote with them.

Ethically challenged Uncle Clarence “Monsanto” Thomas actually put forth an opinion??? OMFG! Scalia’s hand obviously made it all the way through the colon and up to Thomas’ mouth in order for Clarence actually to issue an opinion!

I’m certain he went right back to sleep afterwards.

There are plenty of straight Alabamians who support SSM. I think you meant homophobic bigots of Alabama.

This will be the most anti-climatic Supreme Court decision in recent memory.

I would have thought that might be Utility Air Regulatory Group vs EPA (2012), when the usual 5 suspects ruled that while the EPA could regulate greenhouse gases (that was decided in an earlier case, in 2007), it could only do so on large stationary sources like power plants, and not smaller stationary sources like shopping centers.

I’m not sure what the gay marriage cases have to do with the climate.

Oh, you are mean…

Well, we all saw this one coming.

Hey, it’s Roy Moore, the Ten Commandments judge – he craves controversy. I still can’t understand how he managed to get elected (again!) Chief Justice of the Alabama Supreme Court after he was thrown out of that same position for refusing to obey the order of a federal court. And now he’s doing it again. And why not – there seems to be no real price to pay for it in Alabama.